Providing a pathway for children to develop physically and mentally as champion people through water activities. With these goals in mind we offer holistic training programs for children to strive for personal excellence, through to World and Olympic competition.
With each generation of youth Ikaika provides a positive Ohana for them to develop their potential as champion people both on and off the water!
OUR OBJECTIVES:
JOIN THE IKAIKA OHAHA DONATE NOW 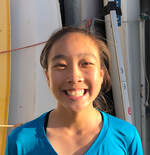 Sabina Funasaki (14yrs)
Ikaika is one of the best things I have gotten into. It is my second home filled with caring, positive, and inspiring people. I joined ikaika around 3 years ago and from the beginning, I’ve learned and grown so much. I now have a goal and am training to go to the Olympics! It wouldn’t be possible without ikaika. I have learned about life skills like the ASPIRE philosophy (attitude, sportsmanship, perseverance, individual responsibility, respect, enjoyment and enthusiasm). This has helped me with anything I do in life, whether that be sports, musicals, or passion projects.

FOR MORE testimonials ABOUT EXPERIENCES WITH OUR COMMUNITY YOUTH NON PROFIT "IKAIKA HawaiI" GO TO
"GREATNONPROFITS.ORG"

the amazing History of "IKAIKA"

IKAIKA " STRENGTH AND PERSEVERANCE" After competing in the 1996 and 2000 Sydney Olympics, Olympian Shelley Oates-Wilding formed a ladies Outrigger Team called "IKAIKA" in Sydney, Australia. The mission of the team was to provide opportunities for kayakers and multi-sport athletes to develop as well rounded "waterman" and also participant in the sport of Outrigger Canoeing to compete in State, National and International competitions. In the 3 years of the club, the women’s team was undefeated in Australia in every event, and she then developed a junior team to perpetuate the philosophy of becoming a "WATERMAN" through developing in many different watersports on the Northern Beaches of Sydney.

​After her second child, (Kai 1997, Kali 2002) in 2004, Shelley moved with her family to the Olympic Site outside Atlanta to coach the USA Premier Canoe and Kayak Club: Lanier Canoe and Kayak Club (LCKC) and in 2006, she returned to Australia to compete for Australian in the World Championships for Kayaking, continue to paddle outrigger with the prestigious Team Bradley and work towards the 2008 Olympic Games. After missing the 2008 Olympic Team she turned her time to coaching juniors to the National Sprint Kayaking Championships and the Olympic Hopefuls Regatta in Croatia. Spending time each year in Hawaii, in early 2010 she decided to relocated to Hawaii full time after being hired as the head coach of “Hawaii Canoe and Kayak Team” (HCKT).

In 2012 Shelley developed her own organization to perpetuate the positive benefits of the Hawaii "Waterman's Culture" through delivering safe, fun, learning experiences with trained coaching of water activities as well as life lessons including kayak, outrigger, surfski, stand up paddle boards, paddle boards, rowing waterpolo and so much more. With the growing awareness of Hawaii’s need for safety education as well as an abundance of youthful potential of champion paddlers, IKAIKA HAWAII was formed as the non profit Ohana to support the development of multi skilled, respectful "Waterman" trained in Safety and Ocean Stewardship.

In 2013 IKAIKA HAWAII gained its 501c3 status and has continued to grow a productive board to support our mission of perpetuating the development of champion waterman both on and off the water through positive water sport activities. Ikaika Hawaii Athletic History and Resume  2013 Was the Inaugural Year of Ikaika Hawaii to field traveling representative teams. April—-National Trials in Oklahoma City Ikaika Hawaii athlete Kawika Kaleleiki, performed well in both the 200m and 1000m to gain selection in the USA Canoe and Kayak Team. He represented both Hawaii and the USA at the Lake Placid Invitational Regatta, and went on to compete in the Olympic Hopefuls Regatta in the Czech Republic in September, 2013. August— National Kayaking Sprint Championships—Oklahoma City. Ikaika Hawaii was represented by 14 athletes of which ALL made National finals (unfortunately many of these races were then cancelled due to extreme local weather). Kai’olu DeFries won her first National medal which was also Ikaika’s first medal, when she took Bronze in the K2 200m event.

Each year 2013 through to now we take young and old athletes to the National Championships and continue to increase our participation and results. Each year we continue to prepare athletes for the National Trials and have had representatives in the National Team every year since Ikaika Started.
Other Achievements:  ILH KAYAKING: IKAIKA Athletes have always placed in the top few in each division as well as several All Stars each year.  2013-14 Riley Kawananakoa & Waileia DeFries both won the ILH JV Championships Series and Riley also won the Championship Race. IKAIKA Athlete Kai’olu DeFries won the Varsity Championship Series and Championship Race in the Sprint Division & was one of many Ikaika athletes who became ILH ALL STAR Kayakers. Kaya McTigue was second in the Varsity Distance Series and Championship race as well as an ILH ALL STAR Kayaker. In the boys division, Nick Dunham 3rd in the Varsity Championship Series and Championship Race also an ILH ALL STAR. Other IKAIKA Athletes on the All Star Team include: Hana Ito, Dylan Dimarchi and Jon Chee. Now and continuing on every year since the start  IKAIKA athletes continue to excel in ILH Kayaking with many ILH Champions and ILH ALLSTARS.
​IF YOU'D LIKE TO KNOW MORE ABOUT OUR ILH KAYAKING HISTORY PLEASE LET US KNOW!
CANOE PADDLING: In ILH & STATE Championships IKAIKA athletes continue to field many  teams and participate with great results and enjoyment. 2013-14 Ikaika Athletes placed 2 and 3 in the boys and mixed crews in the State Championships.   MOLOKAI  In 2013 Ikaika took a team of 13-15 year old boys to paddle between Molokai & Oahu. They were not allowed to actually compete in the Molokai Hoe but their time over the same distance would have placed them top 25 in the Molokai Hoe the day later. That year IKAIKA athletes were in the top three place getting crews.
​IF YOU'D LIKE TO KNOW MORE ABOUT OUR ILH PADDLING  HISTORY PLEASE LET US KNOW!
SURF SKI & SINGLE WATERMAN'S CRAFT: Every year since 2013 IKAIKA Athletes competed in several of the Kanaka Ikaika and Paa Distance Races and continue to rank very high in their respective divisions. 2013 Kalei Kaho’okele won the OC1 KANAKA IKAIKA State Championships. IKAIKA Athletes also competed successfully in a variety of Waterman’s events through out the year in kayak, surf ski, paddle board, SUP and even surfing events.
Ikaika Hawaii looks forward to continuing as the platform for these and other young athletes to grow and develop into the finest example of athlete, scholar, and community leader possible.
Ikaika Hawaii continuing to support the  development of  young Waterman as champions both on and off the water! Our athletes continue to develop the ASPIRE Philosophy and excel in Kayaking, ILH Sports, Community Projects and we support and provide them with opportunities to represent themselves, Hawaii and the USA , travel the World and develop the pathway to college. IF YOU'D LIKE TO KNOW MORE ABOUT OUR FOUNDINGS AND HISTORY PLEASE CONTACT US! 808 388 3207

Hawaiian Pride in Our Olympians